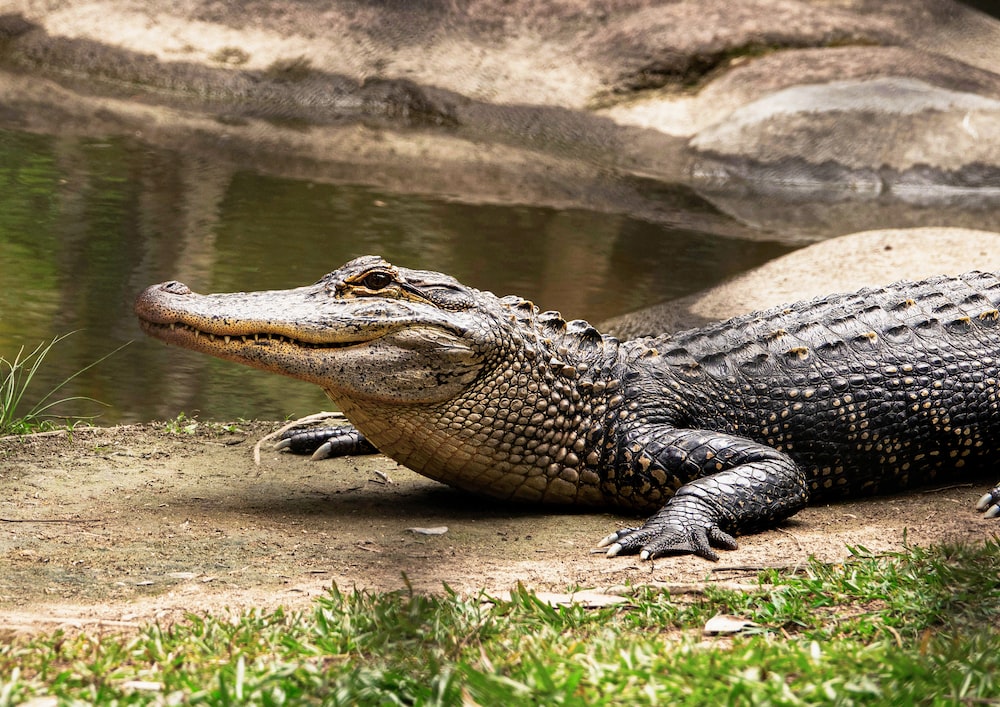 Crocodiles are giant semiaquatic reptiles that live throughout the tropical regions of Asia, the Americas, Australia, and Africa. There are numerous members of the Crocodilia family, including caimans, the gharials, and alligators. Crocodiles assemble in aquatic habitats like swamps, rivers, marshlands, lakes, and sometimes in dirty water.

Depending on the author, there are arguments as to the number of crocodile species, because some of the species are extinct. 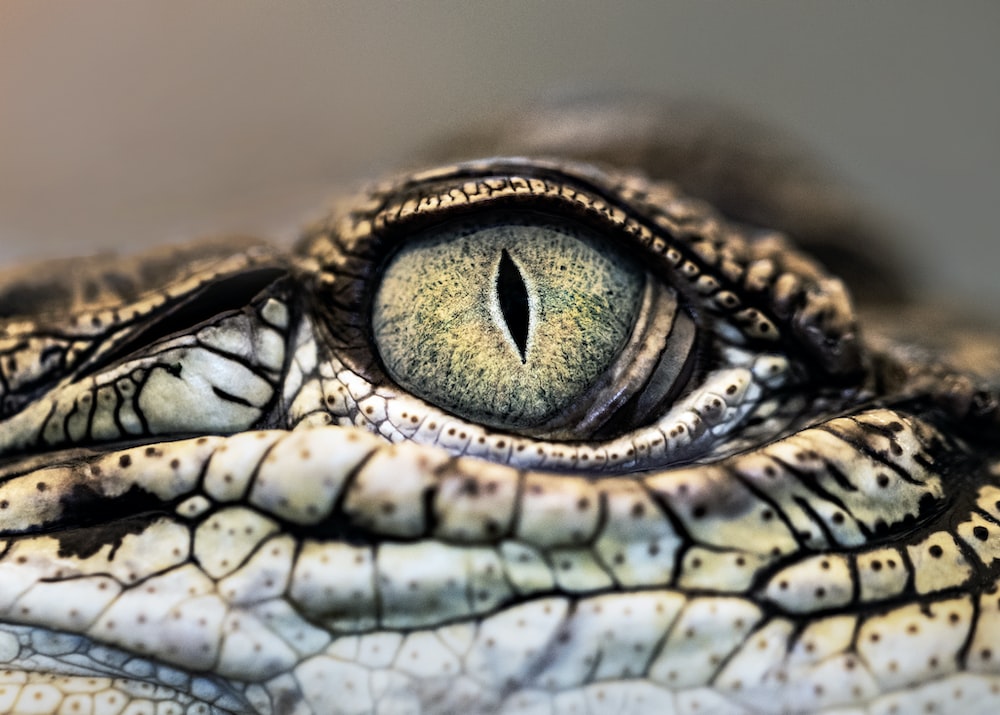 Although they look similar, crocodiles, the gharial, and alligators belong to separate species. The gharial, with its narrow snout, makes it easier to differentiate. At the same time, morphological differences are difficult to spot in alligators and crocodiles. The most visible external qualities are apparent in the head. Crocodiles have longer and narrower heads and a V-shaped snout, while alligators and caimans have a U-shaped snout.

Another glaring trait is that crocodiles' lower and upper jaws are the same widths. The teeth in the lower jaw are on the edge of the upper jaw whenever the mouth is closed. Therefore, all the teeth are seen. The alligator possesses small depressions in the upper jaw into which the lower teeth fit.

Another quality is that when the crocodile closes his mouth, the large tooth in the lower jaw suits into a compartment in the upper jaw. The tooth that sticks out is the most outstanding feature to define the species. Crocodiles have more web on the toes of the rear feet. They can better condone saltwater due to salt glands for sieving out salt, which alligators also have but are non-functioning.

Another attribute that separates crocodiles from other species is their higher levels of aggression.

Crocodiles may look quite primeval. However, they are the most active reptile of our generation. Unlike other reptiles, they have a diaphragm and cerebral cortex. They also have a four-chambered heart.

A crocodile's monstrous physique makes it to be a successful predator. They have a trimmed body that helps them swim faster. Crocodiles also stick their feet to their sides to ease swimming, enabling them to swim faster by reducing the water pressure.

Crocodiles' webbed feet allow them to make sudden moves and fast turns in the water or facilitate swimming. Their webbed feet are advantageous in deeper water, where they sometimes walk.

Crocodiles can hardly move their neck sideways. Therefore, terrestrial defense against other predators can be challenging.

Size significantly differs between species, from the giant Saltwater Crocodile to the Dwarf Crocodile. Large species of crocodiles can get as far as 6 meters long and measure well over 1200 kilograms in weight.

The larger species of crocodiles are hazardous to humans. The Nile and Saltwater Crocodiles are most deadly to humans; they kill 1000 people yearly. Mugger crocodiles and likely the dangerous Black Caiman are also threatening to humans. Meanwhile, American alligators are less aggressive and wouldn't assault humans unless provoked.

However, if there's ever a croc out there that doesn't pose any threats, it's Gage Beasley's Green Crocodile Alligator Soft Stuffed Plush Toy! The only threat you'll face when you have this monster of a plushie on your bed is a full-on 8-hour sleep. How frightening! Crocodiles are ambush hunters, waiting for their aquatic or terrestrial prey to come close, then rushing out to attack. They are incredibly carnivorous and monstrous predators and always have the lion's share of food in their natural habitats.

Because they couldn't chew food, this led to an ambush hunting strategy, and they used their powerful jaws with solid teeth to tear food apart. As cold-blooded predators, they can live for an extended period without food and rarely need to go hunting actively.

Despite their sluggish lifestyle, crocodiles are the top predators in their environment. Various species have been recorded attacking and killing sharks. Crocodiles primarily feed on vertebrates like fish, reptiles, and mammals, sometimes with invertebrates like mollusks and crustaceans, depending on species.

Young crocodiles depend heavily on crabs, insects, fish, shrimps, small mammals, crustaceans, smaller reptiles, and birds. However, as they develop into a larger size, they can hunt bigger prey, including water buffalo, zebra, deer, snakes, and in some cases, wild cats and humans.

Crocodiles are often more actively hunting at night. At the same time, some species are known to take their hunting escapades beyond the aquatic territory onto land to catch prey.

As a result of their social nature, Nile crocodiles, which is notable for feeding on fish, habitually work as a team to capture fishes in the water.

Because of their wetland habitats, Catfish make up a considerable portion of their natural foods.

Typically, Crocodiles have a slow metabolism and float on the water without moving for a long time. In rear cases, they can go dormant without their tissues for a long time.

It is also known that Crocodiles can exist for three years without food.

The Crocodile breeding season is between January and May. The males start their sexual maturity when they are three meters (10 feet) long. Meanwhile, the females' maturity occurs when they are between two and two and a half meters (6.5 to 8 feet) long. It typically takes around ten years for both genders of crocodiles to accomplish their maturity in a normal circumstance.

During the sexual season, the males attract their female counterparts by growling and bashing their snouts. They also blow water from their noses and use various vocalization approaches to serenade the female. Most of the males happen to be successful in their ordeal.

Once a male succeeds in winning the female over, both lay and rub the underneath of their jaws together.

The female crocodile covers her nest with leaves to prevent the eggs from getting cold since the nest is by the river bank. The rotting leaves keep the nest moist and the eggs warm during incubation.

In habitats prone to flood, they may likely build nest ridges to elevate the eggs out of danger from floodwaters.

The incubation temperature required for crocodile eggs is between 28 – 32 degrees Celsius, and relative humidity is 95% to 100%. The incubation time is usually about three months long. Baby crocodiles are often born at a time that coincides with the rainy season's start, which helps prevent the babies from drying out.

Despite their formidable status, crocodile moms are unbelievably caring and protect their nests aggressively to guard them against predators until they are hatched. Once the hatchlings begin to come out, the mom then helps them into the water, where they instantly start feeding on shrimps, crabs, and insects.

Statistically, the mother will lose about half of the babies to predators in the first year.

The light-shelled eggs of crocodiles were a progressive breakthrough for many crocodile species. Their waterproof nature and protective layer meant they could lay eggs on land instead of water, even in dry places, meaning they're better protected from predators.

Calculating crocodile age is unrealistic, although several measures have been used to derive an accurate guess. The most popular method is to use lamellar rings in teeth and bones. Each of the rings conforms to an improvement in growth rate, which usually happens yearly between wet and dry seasons.

Having these imperfects in mind, I establish that all crocodile families have an average lifespan of between 25 and 75 years. The oldest species of crocodiles seem to be the largest species. The Crocodylus porosus is calculated to live about 70 years with limited evidence.

A male crocodile lived roughly 110 to 115 years in a Russian zoo. Another male freshwater crocodile in an Australian zoo lived up to 140 years of age. The freshwater crocodile was popularly called "Mr. Freshie," he was rescued in 1970 by Steve Irwin and Bob Irwin after being shot by hunters from where he lost an eye as a result of the gunshot and eventually lived until 2010.

In Scottburgh, South Africa, Crocworld Conservation Centre claims to have a Nile crocodile born in 1900. According to Martin Rodrigues, the center director, he was named Henry. The crocodile has lived in Botswana along the Okavango River.

Crocodiles can move quickly over a short distance, even on the land. Its land speed record is 17 km per hour measured in an Australian gallop freshwater. The speed varies among species. Some of the following species can gallop, including New Guinea crocodiles, Cuban crocodiles, Johnston's crocodiles, Nile crocodiles, and African dwarf crocodiles.

Most species' fastest means of movement is a "belly run," which is a snake-like body movement (sinusoidal motion). Crocodiles can accelerate to 11 km per hour on "belly run," and they are faster when slipping down a muddy riverbank.

When a crocodile walks fast, it holds its rear limbs straight and upright position below its body, called a "high walk." This movement improves its speed up to 5 km per hour.

Crocodiles may be naturally possessive of their territory. According to Wikipedia, three saltwater crocodiles were transferred 400 km away from home by helicopter in Australia. But eventually find their way back home in three weeks, based on information collected from tracking devices attached to them.

In the same way as other reptiles, crocodiles are not able to regulate their body temperature themselves and instead rely heavily on the heat of the sun to warm their enormous bodies up. During the hot daylight hours, they bask in the sun on the riverbanks warming their bodies up from a night of hunting. Smaller species like the dwarf crocodile are also known to climb trees in order to bask on the branches.

Another way crocodiles are able to regulate their body temperature is by bobbing up and down in the water, warming in the sun on the surface, and cooling themselves down beneath it. Crocodiles are highly sociable animals that remain together in large, mixed groups of adults and juveniles.

However, when the mating season begins, the males become highly territorial and protect their stretch of the riverbank from intrusion by competitors by rearing their large heads high up into the air and roaring at intruders. When female Nile crocodiles are attracted by these noises, the males begin to thrash their bodies around and even shoot water into the air from their nostrils. 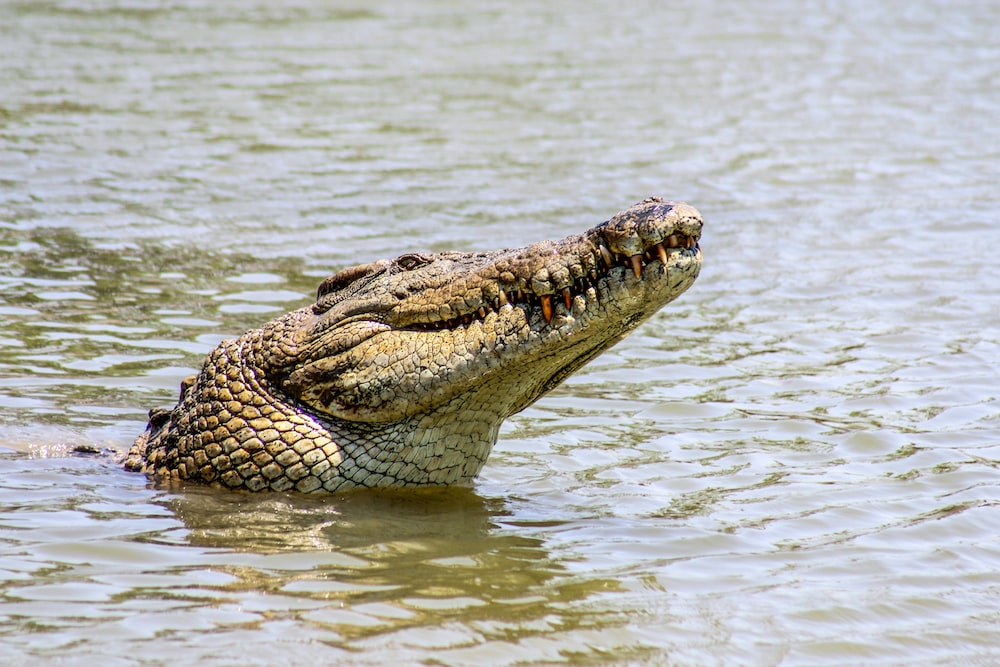 Crocodiles are discovered in various swamp habitats throughout the warmer tropical waters in the southern part of the world. Their weakness in internally managing their body temperature means they count heavily on the sun to heat their bodies after staying long in the water.

The American Crocodile is the most significant crocodilian species in North and South America and often inhabits lakes, freshwater rivers, and salty coastal waters near estuaries and in shallows from the southern part of Florida, throughout Central America, and also into northern parts of South America.

The Nile Crocodile was once common in Africa's eastern and southern parts. However, they are currently scarce. These dreadful reptilian giants are found in delta and dirty swamps from the delta of West Bengal State in India, across and through to Southeast Asia, and down to Australia. They dwell in freshwater marshes, mangrove swamps, rivers, and lakes. The largest and most commonly dispersed species of crocodile is the estuarine crocodile.

The Crocodile is an enormous reptile that is aquatic and terrestrial in nature. With about 30 different species of Crocodile having relatively erratic behaviors. Its presence in Australia, America, Asia, and Africa makes it famous worldwide.