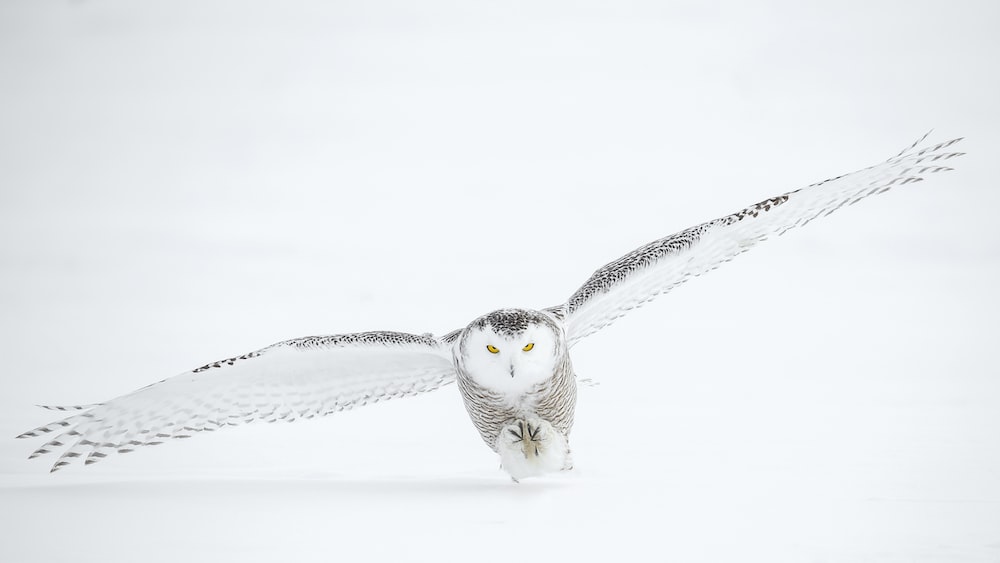 Soaring through the snow-covered skies, the snowy owl is a magnificent creature. This beautiful bird is one of the largest members of the owl family and is easily recognizable with its white feathers and round yellow eyes. Although they are most often found in cold, arctic climates, these regal birds can occasionally be seen in more temperate areas during the winter months.

This article will explore all there is to know about the snowy owl, from their physical appearance and habitat to their diet, reproduction, and other interesting facts. So read on to learn all about this amazing animal! 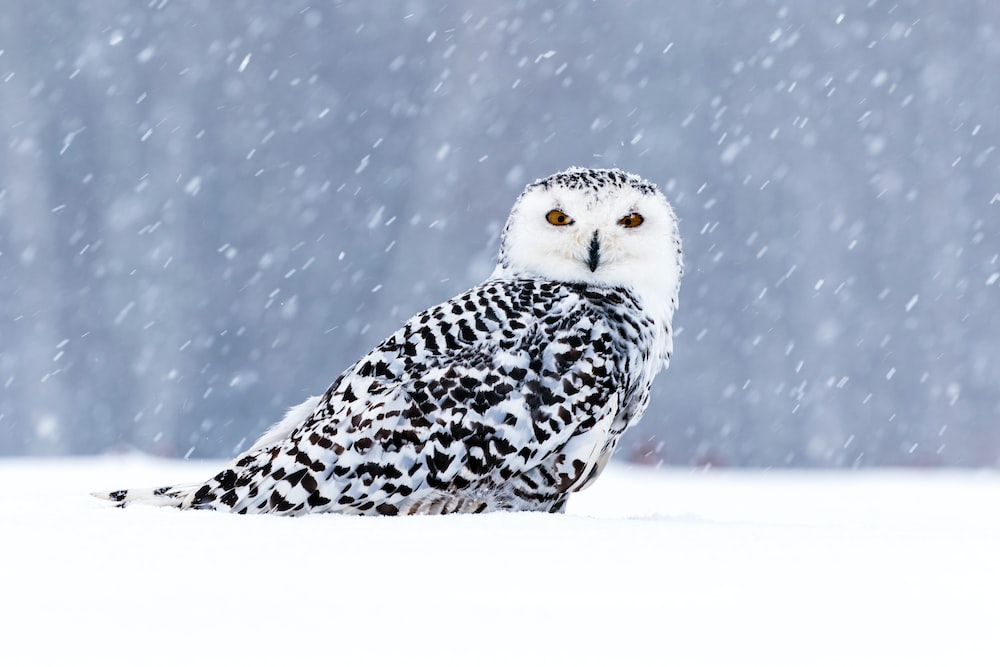 The Snowy Owl (Polar Owl) is a large owl of the typical owl family.

These large white birds have varying brown or black markings on their wings and body.

Adult males are almost all white, while females and juveniles usually have more flecks of black plumage. Some birds may be entirely black.

It has a large head with a round facial disc featuring prominent concentric black and white rings, yellow eyes, and ear tufts. It also has a powerful body and large wingspan relative to its overall size.

The Snowy Owl is one of the heaviest owls per unit of body size, but its appearance can vary significantly across its broad range. Birds from the North American tundra tend to be larger than their counterparts further south, with large male owls occasionally exceeding 2kg. Meanwhile, the smallest southern birds may weigh as little as 600g.

Despite its shiftless look when sitting on the ground, it is a powerful flier, capable of reaching speeds over 60km/h. Its wings are wide and long, adapted for long flights over vast expanses of open habitat.

Unlike many other types of owls, the Snowy Owl is active during the day and at night. It typically hunts from a perch or while perched on the ground, scanning the surroundings for prey before pouncing with lethal efficiency.

Snowy owls are excellent hunters, and they use their sharp talons to kill their prey.

The diet of a snowy owl consists mainly of lemmings and voles. However, these birds will also eat other small animals, such as rabbits, mice, and birds.

In the winter, when food is scarce, snowy owls have been known to hunt ptarmigans, ptarmigans being a type of grouse. When food is plentiful, snowy owls will store extra prey in caches, which they can return to later when hunting is more complicated.

Keep this lifelike Lifelike Snowy Owl Stuffed Plush Toy in your home to watch over you and your family. Snowy Owls are monogamous, meaning they have one mate at a time. However, they do not mate for life and will have a different mate each year.

The breeding season for Snowy Owls is between May and September. The male Snowy Owl will perform an aerial display to attract a female during this time.

Once the female has been attracted, the two owls will nest together, and the female will lay 3 to 11 white eggs. The eggs will hatch 14 to 26 days later, and the chicks will leave the nest soon after.

The lifespan of a Snowy Owl in the wild is ten years or more, and in captivity, they can live up to 28 years old.

The Snowy Owl is a bird of the true north. Inhabiting the arctic tundra, it is perfectly camouflaged against its snowy surroundings.

The owl can be found as far north as the pack ice and rarely ventures south of the tree line. Although the owl has a circumpolar distribution, it is irruptive, meaning that it will occasionally venture much further south than usual in search of food. In North America, irruptions typically occur every 4-5 years and coincide with increases in the lemming population, which makes up a large part of the owl's diet.

During these times, Snowy Owls can be found in southern Canada and even as far south as the northern United States.

The owl's habitat consists of open areas with good visibility, such as marshes, tundra, meadows, and fields. It will also use human-made environments such as airports, which provide an abundance of small rodents to prey on.

To survive in its frigid habitat, the owl has several adaptations. Its feathers are thick and dense, providing insulation against the cold. It also has specialized blood vessels that help to reduce heat loss from its extremities. Additionally, the owl's feet are covered in feathers, which help to keep them warm and prevent heat loss through evaporation. 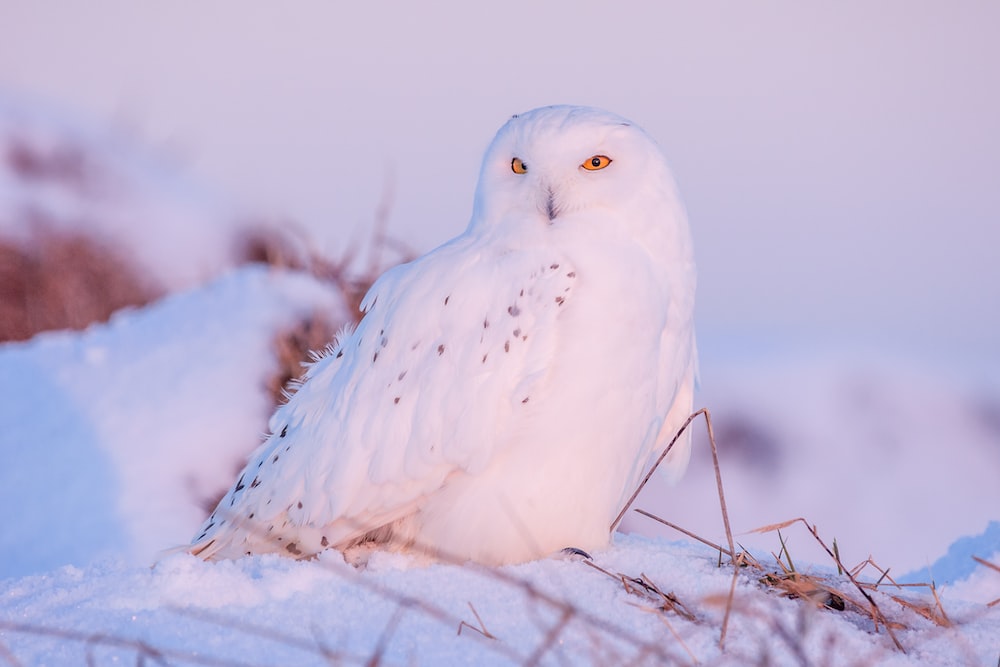 The Snowy Owl is a beautiful bird that is sadly in decline.

Once widespread across the Arctic tundra, the snowy owl has experienced a sharp decline in population in recent years and is now classified as vulnerable.

The primary threat to the snowy owl is habitat loss, as their breeding grounds are increasingly being developed for human settlement and resource extraction.

In addition, climate change is causing the Arctic to warm, leading to a decrease in the population of rodents, which are a major food source for snowy owls. With their food sources disappearing and their breeding grounds under threat, we must take action to protect this magnificent bird.

These are some other interesting facts about the Snowy Owl:

One of the most beautiful and majestic birds globally, the Snowy Owl is a true icon of the north. However, these fascinating birds are in decline, and it is up to us to help protect them. With a bit of knowledge and effort, we can ensure that these amazing creatures continue to grace our world for generations to come.