I'm sure you've all heard about the Macaw before, and if you're not, don't worry. It's a very popular bird often discussed in avian circles. People seem to love or hate them; there isn't much of a middle ground.

So, what's all the fuss about? Why are people so passionate? Today, we will look at the Macaw and determine why it has become a famous bird. We'll also describe their appearance, diet, habitat, conservation status, how they reproduce, and other interesting facts. 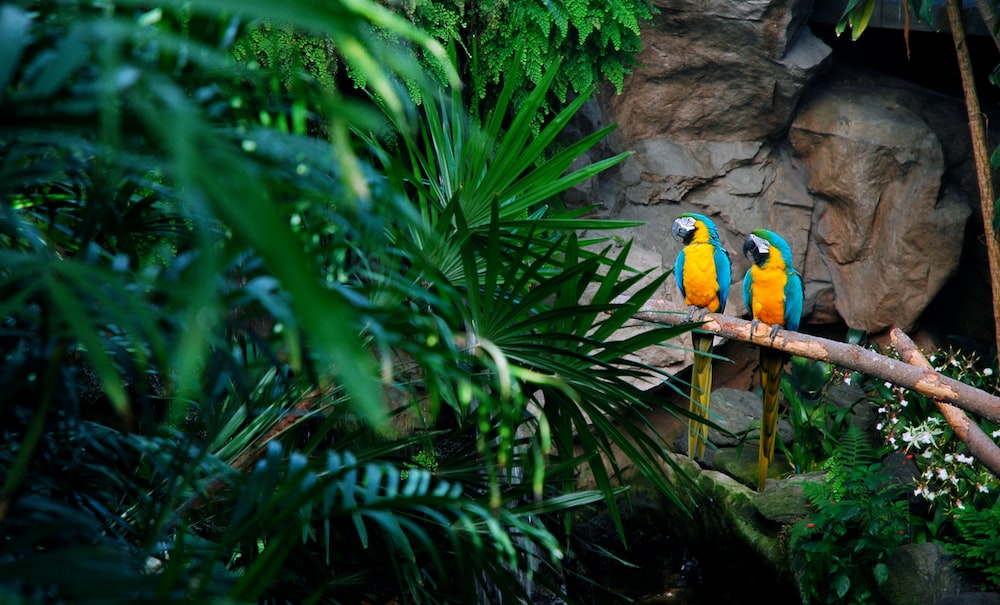 Macaws are a type of parrot that belong to the family Ara. There are about nineteen different species of Macaw, and they come in a variety of colors, including blue, green, yellow, red, and orange.

Macaws are large, king-sized parrots with features that set them apart from other bird species.

Their long-curved beaks and strong, agile toes are perfectly adapted for cracking nuts and foraging for insects on the forest floor.

Additionally, these stunning birds have loud, screeching and squawking voices that make them noticeable in their natural habitats.

The macaw’s range in head to tail length from about 40 inches to over 5 feet.

Other striking features include their large, round eyes and the colored feathers on their heads, called "lores."

The lores can be bare or covered in feathers, and they are usually a different color than the rest of the bird's plumage.

For example, the Blue and Yellow Macaw has yellow lores against its blue body.

The Scarlet Macaw has red lores, and the Green-winged Macaw has blue lores.

The macaw diet generally consists of fruits, nuts, and seeds. However, they will also occasionally eat leaves, buds, and flowers.

Macaws often feed on various fruits in the wild, including bananas, mangoes, and papayas.

They will also eat nuts, such as Brazil nuts and almonds. In addition to their regular diet, macaws will also consume clay from riverbanks. This clay helps them to detoxify their bodies and absorb nutrients more effectively.

The Hyacinth Macaws need a higher level of fat in their diet than other macaws, so they often eat oil palm fruits.

Macaws are beautiful, colorful bird’s native to the tropical regions of Central and South America, including Mexico.

These striking birds spend much of their time in the trees, foraging for food and building nests in the branches.

The lush forests provide plenty of cover from predators and plentiful food sources, such as fruits and seeds.

Meanwhile, the wide-open savannas offer fields for foraging and safe spaces to breed.

Finally, the wetlands provide essential water sources for the birds' long-term survival. With all of these different habitats available, macaws can thrive in the beauty and diversity of the tropical regions they call home.

The majority of Macaws are endangered in the wild. The primary threat to these birds is habitat loss due to deforestation.

As the demand for timber and agricultural products increases, so does the destruction of macaw habitats.

In addition to habitat loss, macaws are also threatened by the illegal wildlife trade. These birds are captured and sold as pets on the black market.

As a result of these threats, many macaw species are now listed as endangered or critically-endangered on the IUCN Red List.

Some aspects of their ecology also put them at risk. For example, their slow reproductive rates make it difficult for them to recover from population declines.

Despite the challenges they face, there are still many ways to help conserve these magnificent creatures.

Macaws are beautiful and majestic birds with brilliant feathers and piercing eyes that capture the imagination.

They are also fascinating creatures in their mating and reproductive behavior. For instance, macaws reach sexual maturity at around 3 or 4 years of age, and they typically mate for life.

Additionally, copulation lasts for between 2 and 3 minutes, with the female laying her eggs in a nest of twigs and leaves that she builds in a tree cavity.

The mother then incubates the eggs until the chick’s hatch, while the father is in charge of bringing food to the mother.

And as if all of this weren't enough, macaws can live for up to 50 years in the wild - indeed an impressive feat for these incredible creatures.

The following are some other interesting facts about macaws:

In summary, macaws are incredible birds that are not only beautiful but also intelligent and fascinating creatures. They face many threats in the wild, but there are still many ways to help conserve these magnificent animals.