Poison dart frog (also known as a dart-poison frog, poison frog, or formerly known as poison arrow frog) is the common name for a group of tropical Central and South American frogs in the family Dendrobatidae.

These amphibians are sometimes referred to as "dart frogs" because Native Americans used their poisonous secretions to poison the ends of blowdarts. However, only four species out of approximately 170 have been recognized for this purpose. 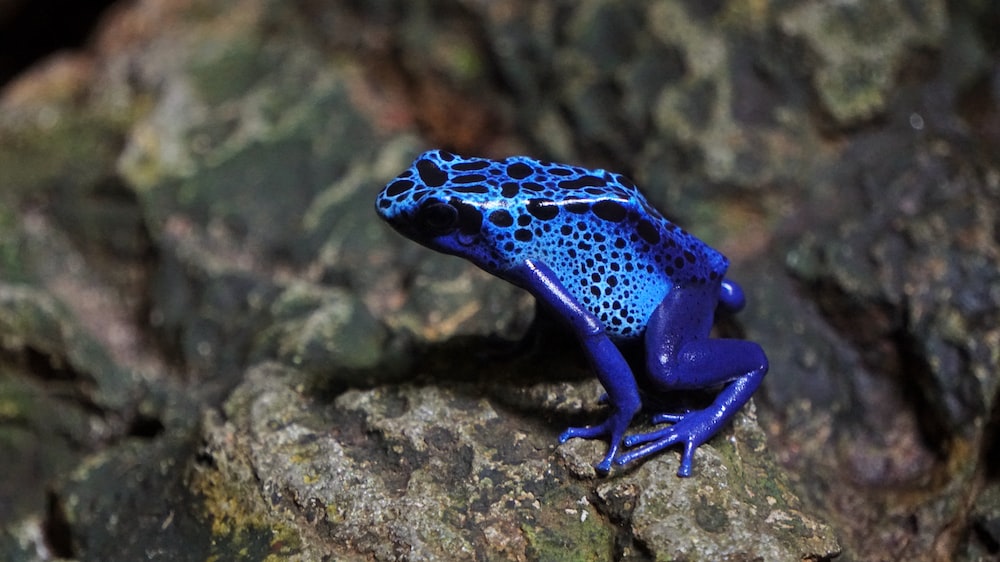 Most poison dart frog species are tiny, measuring less than 1.5 cm in adult length, with a few reaching 6 cm in length. On average, they weigh 1 oz. Most poison dart frogs are brilliantly colored and feature aposematic patterns to alert prospective predators. Their coloring is related to their toxicity and alkaloids levels. Gage Beasley’s Poison Dart Frog Soft Stuff Plush Toy allows you to experience their beauty from the comfort of your home. These species are active throughout the day and have brilliantly colored bodies. They are available in yellow, red, blue, orange, and green. This brilliant color is linked to the species' toxicity, making them aposematic. Some family members have highly vivid colors and considerable toxicity, whereas others have cryptic coloration and little to no toxicity.

Poison frogs primarily feed on minute invertebrates found on the forest floor, like ants and termites. Many animals catch prey using their sticky, retractable tongues. A particular arthropod and other insects are eaten in the wild to provide the Poison dart frogs with poison. These insects get their poison from their plant diet, according to scientists. As a result, poison frogs raised in captivity on a diet of crickets and other non-poisonous insects are not poisonous.

Most species have omnivorous tadpoles that consume everything from algae and debris to insect larvae and dead insects. Some species, such as the tri-colored poison dart frog, are carnivorous and feed on insect larvae and other tadpoles. Females of certain species drop individual tadpoles in bromeliad water and then return to the location of each tadpole to deposit unfertilized eggs, which the tadpoles devour.

They are not poisonous since they are fed tiny crickets, bean beetles, black worms, or fruit flies daily at the Zoo. Insects are occasionally coated with vitamin powder for added nourishment.

Both sexes reproduce throughout the year in moist tropical rainforests, with rainfall being the critical factor influencing the time of reproductive activity.

In their nursery, the tadpoles eat invertebrates, and their mother will augment their food by dropping eggs into the water. Other poison frogs bury their eggs among the leaf litter on the forest floor. Poison frogs' eggs are fertilized externally; the female lays a cluster of eggs, and then a male fertilizes them, much like most fish.

Poison frogs are frequently spotted grasping one other, similar to how other frogs copulate. These protests, however, are territorial wrestling battles. Males and females usually participate in territorial disputes. Males will compete for the most conspicuous roosts from which to broadcast their mating call; females will compete for attractive nests and even invade other females' nests to consume competitors' eggs.

Females, in general, have a say of partner options. Males, in turn, have brighter coloring, are territorial, and are hostile against other males. Females choose partners depending on color, position of the calling perch, and territory.

Courtship can span many hours, and the couple usually visits multiple deposition locations before mating. Courtship continues at the depositing site when the frogs begin a mating "dance" involving mutual caressing and cleaning the leaves' surface.

The clutch size of poison frogs varies between species, ranging from one to forty eggs per clutch. However, in other species, the male discharges his sperm before the eggs are deposited. The couple frequently guards the eggs to prevent them from drying out. Keepers at the Zoo construct an artificial breeding "hut" for the frogs. Some species lay their eggs in bromeliads as well.

The eggs grow into tadpoles after around ten to eighteen days. Males and females both stay with the nest or visit it regularly. The adult rests in the remaining gelatinous egg clutch as the tadpoles wiggle up the hind limbs and onto the back. The parent frog carries the tadpoles to a water body.

Some species move whole clutches of tadpoles at once, while others transport them one by one or only a few. After a few months, the tadpoles metamorphose and become adult frogs.

Other species can be found in lowland grassland that is wet or flooded periodically, arable land, pastureland, rural gardens, plantations, moist savanna, and badly degraded former forest. Frogs have also been found in premontane woods and rocky regions. Dendrobatids prefer to reside on or near the ground, although they may live in trees up to 10 meters (33 feet) above ground. Many species of poison dart frogs have lately been threatened by habitat loss, chytrid illnesses, and pet trade collecting. As a result, some are categorized as threatened or endangered. Zoos have attempted to combat this condition by administering an antifungal medication used to treat athlete's foot in people to caged frogs.

The loss of rainforest habitat by fires and people has led to a decline in these frogs' natural population. The illicit pet trade has also had an impact on their survival. Finally, like many other frog and amphibian species, these individuals are vulnerable to the chytrid fungus. Many species in this family are endangered due to human infrastructure intruding on their habitats.

Despite their conventional name, only three species of poison dart frog, Phyllobates terribilis, Phyllobates aurotaenia, and Phyllobates bicolor, were ever employed by indigenous peoples to coat the points of darts.

The most dangerous species, Phyllobates terribilis, may produce 20 times the amount of toxin as other species. These toxins affect the heart and neurological system, and their name translates to "frog poison" in Greek.